My recent trip to Seville was super jam packed and I think perhaps the idea of putting it into words was daunting, thus the delay in this post.. But here it is, with plenty of photos which can do the beautiful city far more justice than my words ever can.

Firstly, the city is BEAUTIFUL. Full of intricate architecture, vibrant tiling and smiling people. To which I must add, the Seville locals are SO friendly. On one day of the trip I popped down, alone, to a coffee shop whilst my friend George was in bed still. The barista was chatting in Spanish to a customer, and after taking my order in an awful attempt at the language (‘Americano por favor’), the customer asked me where I was from, had a little chat, and proceeded to tell me how welcome I was in Seville, which is very nice.

ANYWAY. Day 1! I had an early as f flight, caught the 4.30am bus to London Stansted and arrived in Seville about 11.30am. I hopped on the bus into the city centre ( a reasonable 4 euros) and met my friend George at the central station. He’s currently working in Madrid so he had got a flight down a couple of hours earlier and had been waiting for me in Seville.

First things first, we went to the apartment, which we weren’t due to check in to until 2, but the host messaged us saying it was cool to leave our bags. The apartment was very nice and very central, with a roof terrace- perf.

Now we needed a beer. The weather was hot, I was in my English weather clothes and I was parched. So we headed to a plaza (not the plaza), and sat outside with a couple of beers.

I realised I wasn’t well equipped, so after a quick trip to H&M for shorts, we headed on to the Plaza Espana, probably the number one tourist spot in Seville. It is stunning. Borderline breath-taking.

In the last photo of those three, you can see a crowd gathered, and that was because there was a group of flamenco dancers performing. V cool. It’s hard to get a sense of the size of this place through photos, but it’s massive, and everything is decorated to high heaven. 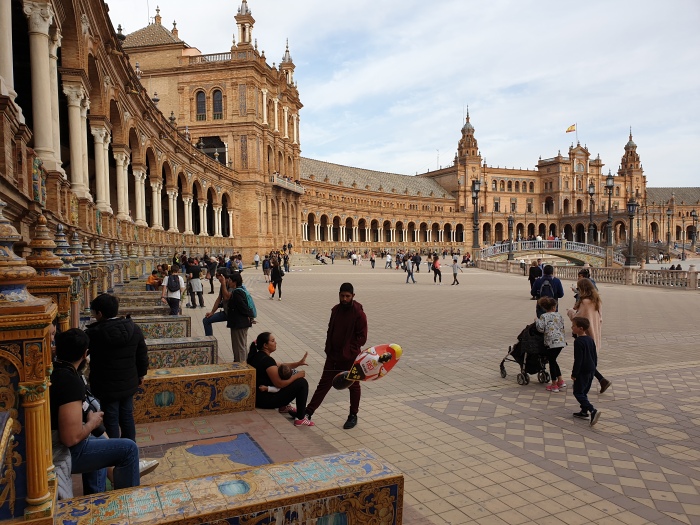 Nearly every city in Spain is represented by these incredibly detailed mosaics you can see me sitting against. They stretch the whole way around, like a giant outdoor free gallery.

We did a bunch more wandering, but already time was getting on, we were tired and thinking about dinner. I’ve already covered everything we ate, so make sure you check that out. We went to the supermarket and bought a bunch of cheap beers (like 30 cents a bottle) and headed to the roof terrace to drink them. This didn’t last long after George fizzed one everywhere, soaking the chairs.

SO, out we went, where we had drinks at Hops and Dreams, Gigante, another bar which had a GIANT gnome sitting on one of the bar stools, and finally we finished in a nightclub called holiday or something like that?

It may seem like we didn’t do much on our first day- but I’d woken up at 4am and didn’t get back to bed until gone 6am after clubbing! We knew we had a good few more days to see the rest, so stay tuned for those posts coming soon! Thanks for reading and make sure you’re following me!