Halloween being on a Wednesday really does put the chocks on the creepiness- halts the horror.. but last weekend me and three pals booked a little airbnb on a private lake to get away for a bit and (inevitably) scare ourselves. The weekend ended in quite the genuine horror, so stay tuned.

We headed up to Hockwold-cum-Wilton, which is in Norfolk quite near Thetford forest. After setting off bright and early we arrived and checked in- the airbnb was literally the only thing around, with a cow field behind it and views overlooking a fishing lake- serene and blissful.

Then it was time to head to Thetford forest, which we didn’t know much about but WHAT A GREAT PLACE (!!!). We totally regressed back to children. Considering it was half term and a Saturday the place was near enough empty, which was p e r f e c t because it meant we could play on the zipwires, slides and other bits and bobs to our hearts contents. As working adults, a few hours playing in a park was a RUSH. Plus, Thetford forest’s playground pieces are awesome- slides that are as tall as a house. Then also, inbetween trees you randomly stumble across little obstacle courses, or giant musical instruments like hugeee gongs or ropes which pull bells like they have in churches. It’s SUCH a cool place- we all luvvved it.

Okay, so, pretty civilised and fun, right? It declined. Pretty fast. I mean, it was still SUPER fun- we went for a pretty good pub dinner at the local country pub, then returned to the airbnb to set up a camp fire. I don’t say this lightly- we drank too much. We drank three and four much. We started far too early and didn’t stop until we’d consumed every drop we’d brought with us. (Too much if you hadn’t caught wind of that.) 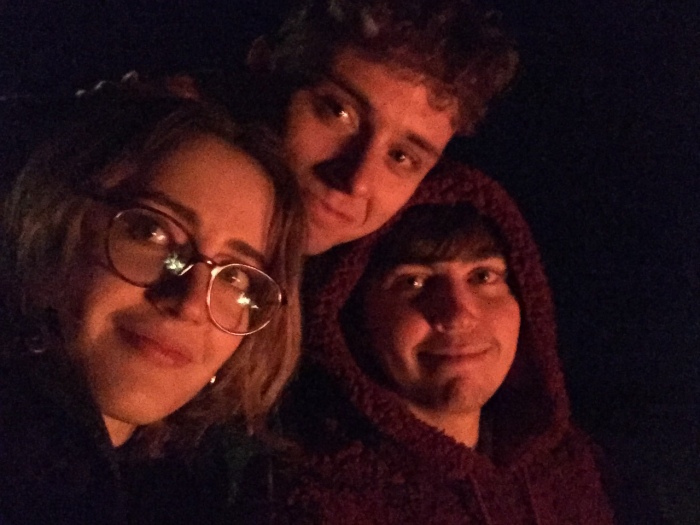 There was lots of vomit.

We woke up the next day to more vomit.

We also woke up to a flat tyre.

The countryside is great until you need something and don’t have a car. To just get to the next road away from where we were staying was a 2.5 MILE walk. We were all feeling like welcoming death with open arms, but we had to walk flipping forever first. And back again.

I know they say you have to take the bad with the good; well Christ did we do that. The Saturday was a really good day, best in ages. Sunday was worst EVER. Awful. Horrific. No redeeming qualities. We were home by a reasonable 6pm and I was asleep by 9.

At this time of year, you expect the scares to be ghosts and witches. Maybe a zombie for good measure. You don’t expect the horror to be a hangover day from hell. Anyway, enough complaining. I don’t want to dwell on the bad when the Saturday was so good. I had an absolute blasttttt. I’m ready to do it all over again next summer.

Thanks for reading, make sure you’re following for more! and until next time- HAPPY HALLOWEEN!