Yesterday was the London Marathon; I’m pretty sure all of you will know about it, even if you’re not reading from the UK? Anyway, I knew someone running it, so went along with my housemate, Hayley, to cheer him on!

Before anything, with the train pulling into Kings Cross, I wanted to seek out Tracy Emin’s new art installation; a big neon sign by the clock which overlooks the station. It’s v cool and v cute. 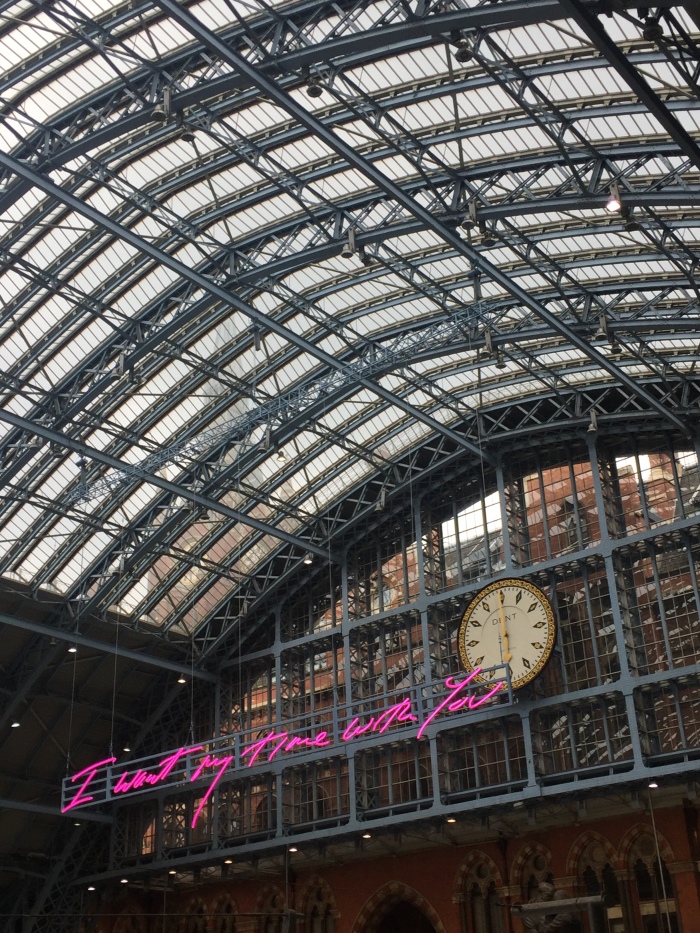 We went with no plans whatsoever, which wasn’t the smartest idea, as we got off the tube at Canada Water thinking we’d find the Quay he’d run past v easily. We didn’t. We ended up at the South Bank, which was pretty damn close to the finish line- about 3 hours earlier than the amateur runners would be there. But we did see the professionals run past which was super cool and the atmosphere was so good; loads of people cheering for people they didn’t know and everyone happy- minus some runners I’m sure.

We then headed to Tower Bridge to catch a glimpse of Matt (the runner we know), and that was a mistake. The bridge was absolutely rammed and we’d just got onto it when he ran past! We only saw his back- woops. Lo and behold, we had to move again. However, no regrets for going on the bridge, the atmosphere was even better here and all the runners looked like they were lapping it up.

So, we then walked to Limehouse, where the marathon laps back round on itself. We found a nice spot at the barrier where we could sun it up whilst waiting, and after about an hour he ran past. We got his attention, had a quick chat and then he was back on his way, where he finished in a v v impressive 5 hours! I’m pretty sure it was his first marathon so even better.

The weather was still pretty damn nice, so we headed to Hyde Park to chill in the sun, but not before stopping off at Waitrose for some drinks. A few Pimms and G+Ts later and it was time to head home, absolutely shattered. We ended up walking about 14km, which is absolutely nothing compared to the marathon, but tiring as f none the less.

And that was that! It was a v cute, heartwarming day- and body warming too with the heat! Thanks for reading- I’ve got another London post coming v soon, keep your eyes peeled and make sure you’re following so you’re the first to see it!!