On Friday we braved the rain (which was torrential) and made our way to the Dutch capital- Amsterdam! It’s a rather expensive train away from Nijmegen, albeit not a long one…

It was my friend Dan’s first time in the city, and his number one priority was to see the sights on foot, so this was our number one aim for the day. However, you can’t go to Amsterdam without a trip to the sex museum, and considering how close it is to the central station, this was our first port of call. 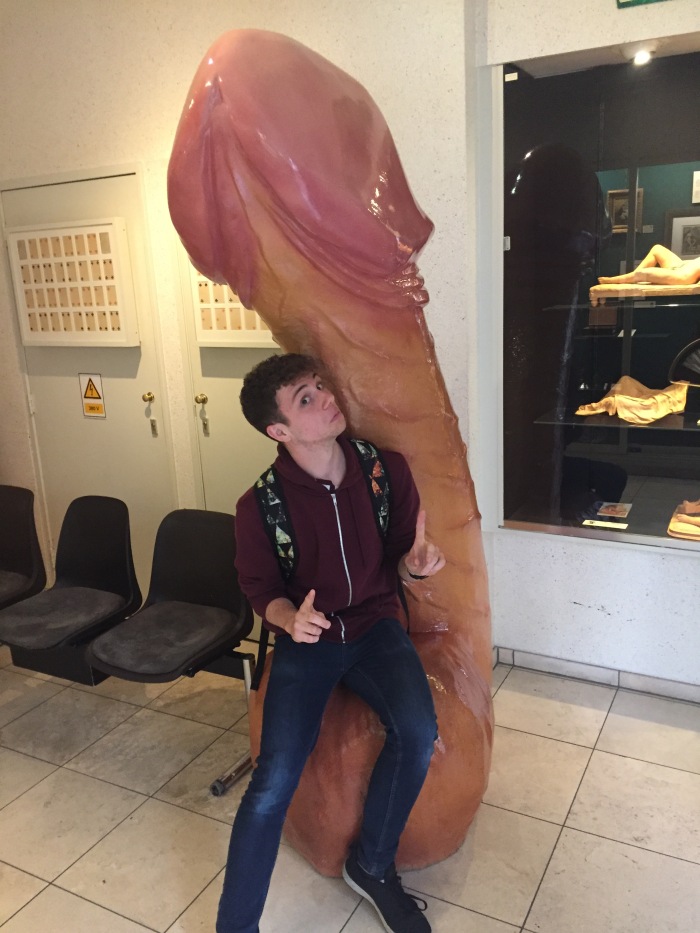 This is certainly one of the less sophisticated things to do in Amsterdam, so up next was some good, old-fashioned, on-foot sightseeing. We started off in Dam Square, where there were lots of street performers and a generally busy atmosphere. 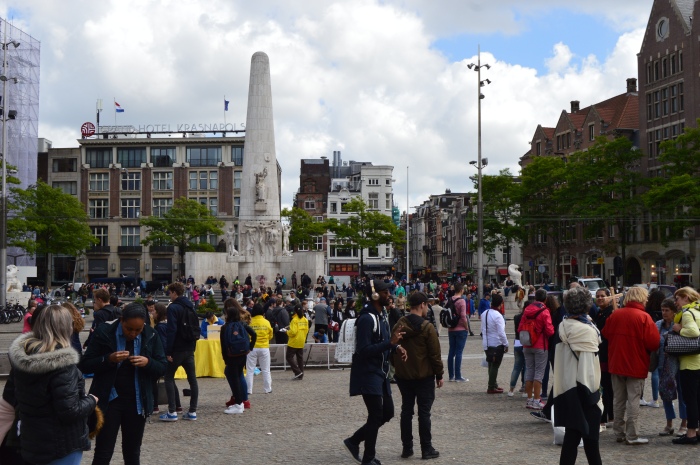 We wandered round for a fair while and took in the beautiful canals, bridges and architecture. Amsterdam really is a pretty place, and although it’s no longer tulip season, the flower market was bustling and is an attractive little street. 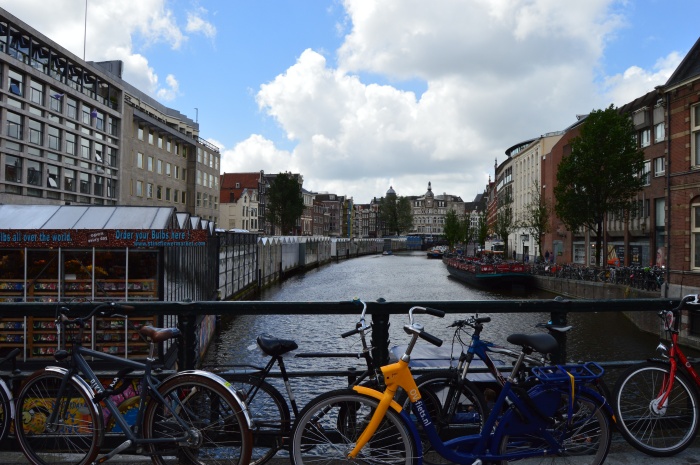 Walking around cities is thirsty work, and one of the re-occurring themes of this trip was the golden liquid known as beer. So it was time to stop for one! We went to a little bar overlooking a canal, that I’d visited before- although it’s always fun to visit new places, it’s also nice to revisit and know where’s nice for a drink!

On two of my previous trips to the city, I’d paid for a canal tour, but I wasn’t massssssssively impressed by them.. But this time, on the walk towards the Rijksmuseum, we saw a place where you can rent pedal-boats! And for a great price! We snapped up the opportunity! 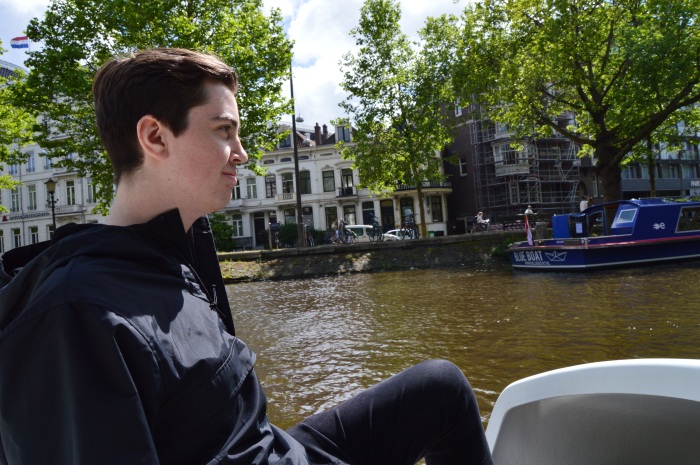 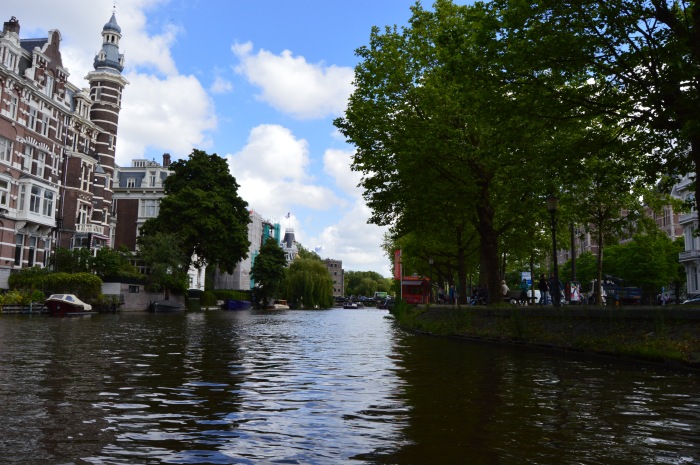 Thankfully the weather had cleared up, and we no longer were faced with the downpour of the morning! In fact, now it was almost too hot when the sun peeped from behind the clouds! Nonetheless, we had the boat for an hour and navigated many canals pretty successfully!

We went from here to the IAmsterdam sign, where Dan posed for a picture *cheeky* and then headed to Vondelpark where we just sat and chilled for a while. We’d cycled to Germany the day before so we certainly weren’t expecting to then be pedalling a boat for an hour- the rest was needed! I was desperate for a drink by this point, and also desperate to try out Stach. It’s a juice/coffee/cafe type place, which is very healthy but also has some incredible looking cakes, and I’d only heard good things. I’ve read a lot of blogs wherein they’ve popped in and loved a juice. I opted for a simple one, and it was delicious. 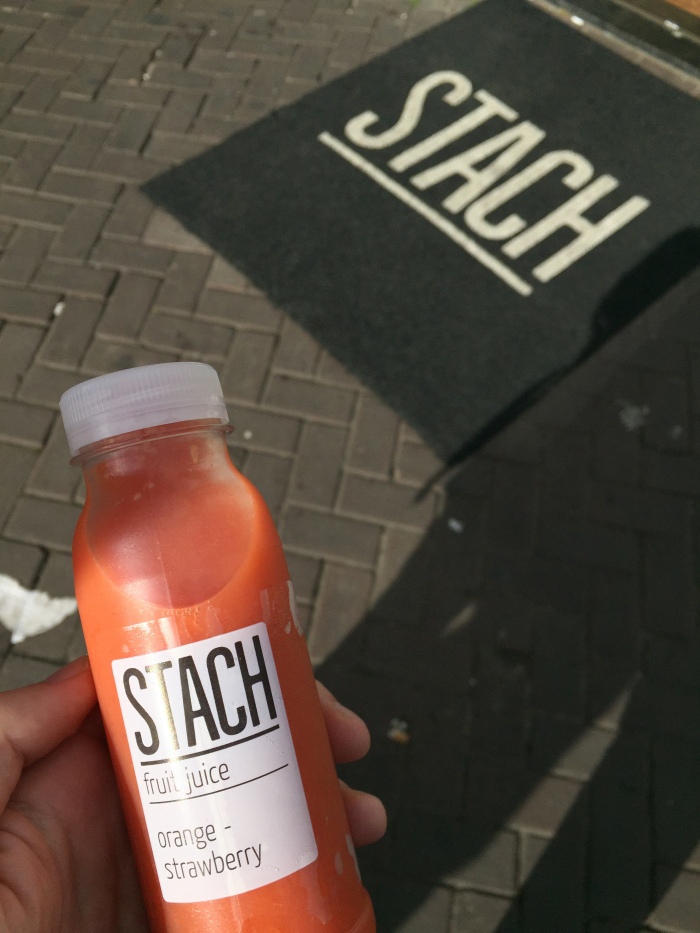 We ate at an Italian for dinner, where Dan was too scared to try his carbonara in case it had pesto in it ((?????) Don’t Ask!) and then it was time to see the red light district in all it’s glory! Obviously, I didn’t take any photos, because I didn’t want any angry women running after me, but it was as eye-opening a place as ever. It’s just so different to anything you ever see in England, it’s crazy! We did a loop of the district, and had a browse through some sex shops (purely browsing !!!) before deciding on calling it a day and heading back to the station for the train ride home!

On the way back we were lucky enough to witness a v v pretty sunset, so we stopped for photos before hopping on our train. 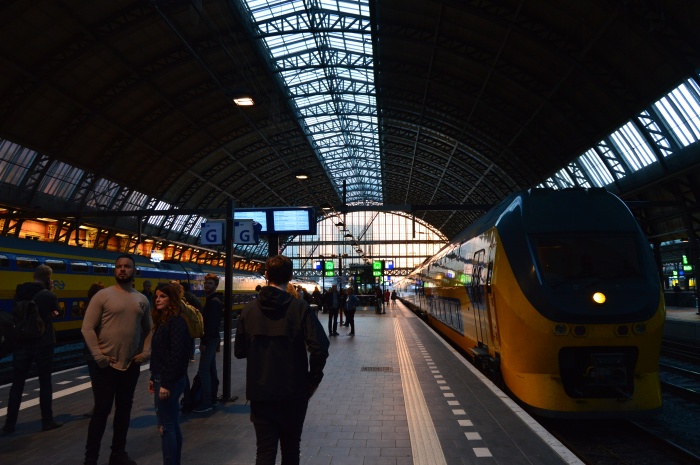 Thank you very much for reading! Please follow me if you enjoyed, and follow me on my social medias dotted around this page too!

*Once again- BIG thanks to http://www.dswaggon.wordpress.com for the majority of the photos in this post- it pays to have a friend with a camera! See Amsterdam from his perspective on his blog tomorrow*

2 thoughts on “Pedal-Boats And Rain Coats in Amsterdam”

if u think my attempt at cutting my own hair looks ok (it doesn't) u should see the back
finally found my zen , still working on the dreadlocks ✌🤮
too much time on my hands really
the face of someone close to clocking their 100th hour on Animal Crossing in 3 weeks
selfies in the park xo
beer soon pls
%d bloggers like this: