I’m not sure how accurately I can say I actually visited Edinburgh, I was there for no more than 12 hours and a good 4 or 5 of those were in the airport! For New Years me and my friend Dan decided it would be a great idea to fly up in the evening of the 31st and back in the morning of the 1st, spending the night at the Hogmanay. On reflection… not the greatest of ideas.

We set off to London Stansted Airport with excitement and anticipation. Delays slowly sucked that out of us. Our flight w
as meant to see us arriving in Scotland at 5.30pm and we didn’t actually get there until 8. This meant we spent a fortune on overpriced G+Ts in the airport, and left us little time to explore the city before heading to the festivities.

In fact we had to go straight to the Hogmanay, so the majority of my time was spent on Princes Street (I think that’s where it’s held- don’t quote me on it!). It was actually a really good time; there were four stages with live bands like The Charlatans playing, and also DJ sets from Guilty Pleasures amongst others. There was a massive party atmosphere, and everyone was having fun. We quickly forgot about the delays as midnight approached. Sorry about the crap blurry photo, it’s the only one I took of anything other than fireworks!

The street has an incredible view up to the castle where the fireworks came from, and the display was awesome. A solid five minutes of incredible fireworks, which filled the sky and made the silhouette of the castle pop. Tens of thousands of people go to this event, and compared to the New Years London fireworks everyone here was much more celebratory and friendly. 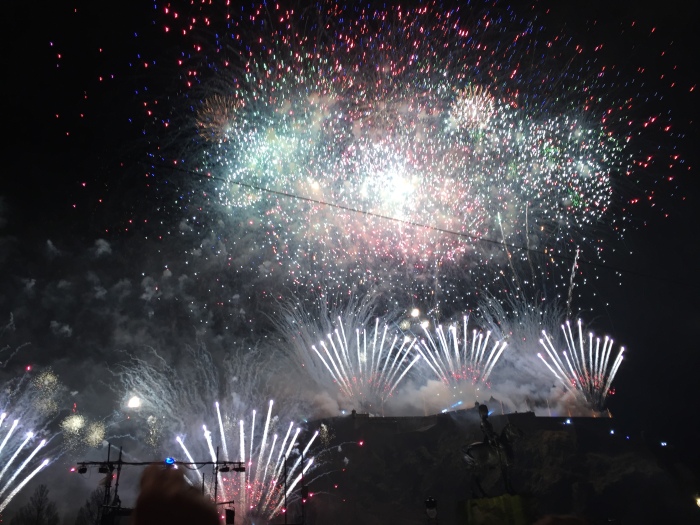 Now, it was officially the 1st of January, and the Hogmanay had ended, but our flight home wasn’t until 11am, so we’d prebooked tickets to a club. The only problem was both our phones were dead and we had no idea where it was! So we soon gave up on clubbing and decided to self guide our own walking tour of the city. It’s a really beautiful place by night, but I’m sure it’s a lot nicer by day.

At about 4am we decided to call it a night and get a tram back to the airport, where we slept on the floor until the security checks opened, and then slept on the benches for quite literally h o  u r  s.

Looking back, it really was an experience, and I’m glad I did it. I’m 21 now and it isn’t really something I’d be able to do in the future (what 40 year old wants to sleep on the airport floor rather than a comfy hotel bed). The trip was filled with hiccups, but through the rose tinted glasses we call hindsight, I did enjoy it!

One thought on “Memories of Edinburgh…”