Carnival is a huge deal in the Netherlands. Around Easter every year a weekend is set aside for this FOUR!! day event, stretching from Saturday to Tuesday. On Friday I got a text from a friend asking if I wanted to go on a spontaneous trip down to Maastricht, famous for its huge carnival atmosphere, and of course I said yes. This only left Saturday to get our costumes, as fancy dress is a massive part of the experience. Leaving it so late wasn’t so smart, so I donned a chicken hat and stuck various stickers of poultry birds over my clothes, creating a really crap costume but it was in the spirit of the event!

The carnival kicks off pretty early, and we had a two hour train journey, so much of the group used the time on the train to apply heaps of glitter and diamantes, and we all started drinking and getting merry from about 10am- hardcore right? We got to Maastricht and headed to a friend of a friends flat for final preparations before hitting the Carnival.

The atmosphere was great; a huge party spreading over the entire city. Outside the huge church was a ‘rave van’ playing trance-esque dance music and had hundreds of people dancing. There was also loads of traditional Dutch Oompa music filling every street, and everyone was so happy. The city was awash with colour- people put soooo much effort into their costumes! We looked pretty under-dressed! Drinks were flowing all day, and the carnival parade itself consisted of some great floats, some great marching bands, and some vans just blasting out music. It really was a huge party! I’ve been to various festivals but nothing that has ever created the sheer happiness of carnival, and I can see why the Dutch value it so much! My picture really does the thing no justice, and  I was too caught up in it all to take any focused pictures..

It was a really great day, and well worth the travel. I’m off to Utrecht tomorrow, which I’ve heard is nowhere near Maastricht’s level, but I’m sure it will be a good day nonetheless! Thanks for reading! 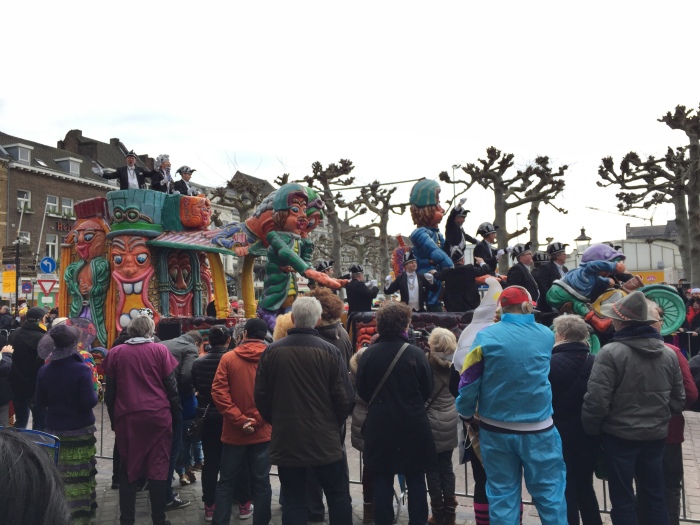